Screaming, whining, kicking and throwing stuff, even running away – temper tantrums come in various shapes and forms. And they are common among kids between the ages one and three.

While tantrums are a normal part of child development, dealing with them can be frustrating. Especially when they happen in public.

But why do temper tantrums happen? And what is the best way for parents to handle them?

Temper tantrums in children are an intense outpour of emotions which can lead to crying, screaming, hitting, throwing things and more. They usually stem from negative feelings such as anger, disappointment, or frustration. 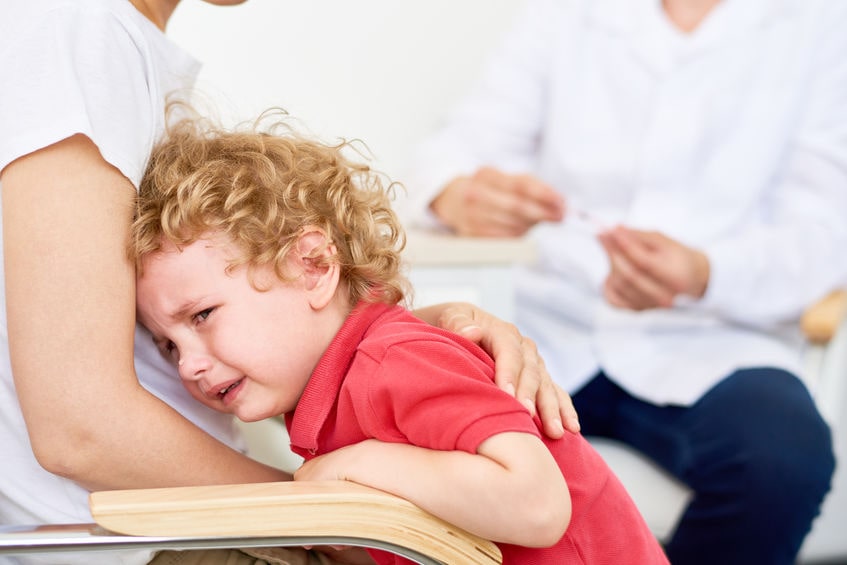 They are very common during the second year of life because this is the stage where young kids aren’t capable of expression and reasoning yet. This is the phase when their language skills are only starting to develop. Therefore, in situations when they can’t express what they want, need and feel, they tend to throw a tantrum.

Toddlers aren’t yet experts at the ability to regulate emotions. It’s a skill they are only starting to learn at this stage in their development.

They have emotional meltdowns when they realize that they have no control over their environment and can’t have everything they want. But it doesn’t mean these kids are spoiled brats.

So how can parents best handle tantrums?

Don’t force them to calm down

Unless your child is being physically aggressive to himself or others, it’s best to ignore them instead of forcing them to calm down. The more you give the tantrum your attention, the more you encourage their undesirable behavior.

Wait for a few minutes before checking back on them. Just make sure they are not hitting, biting, kicking or hurting anybody.

However, if things start getting worse, immediately remove them from the situation.

Stay calm and never scream back at them

It’s easy to get frustrated when your child begins to throw tantrums. However, giving in to your own anger will only make matters worse.

Never yell back at them when they’re raising their voice. Try to keep calm as best as you can and keep the tone of your voice low.

If it happens in a public place like the movies or a restaurant, take them outside first and talk to them calmly. Try not to embarrass your child for having emotions they don’t yet know how to express.

Give them some space

For as long as your child is not being destructive in any way, you can leave them alone for a while so they can have some space to let their emotions out. Allow them to vent and let their feelings out until they feel calmer and better.

Tantrums can’t hurt your child, so it’s okay if you let them be for a while.

This way, you can avoid engaging in a power struggle or yelling match.

Acknowledge and understand their feelings

Young kids, especially toddlers, wish they can verbalize what they want and need every single time. But it’s not that easy. Their vocabulary is limited, therefore, their communication is also limited.

Most of the time, they have wishes that they want to have met but they can’t easily get the message across. In the end, they’ll throw a tantrum to release their frustration.

What you can do at this point is try to understand their feelings and empathize with them. Find out the reason behind the tantrum and why they freaked out.

For example, if it’s because they find it hard to tie their shoes, validate their feelings and say something like “it’s frustrating when you can’t seem to get your shoes laced properly, right?” If they nod or agree, help them out and teach them the easiest way to do it.

Young kids are naturally restless. You can’t keep them glued to one place for a long period. If you bring them to a long dinner at a restaurant, expect them to be looking for things that could keep them occupied.

This is where rewards for positive behaviors come in handy. You can offer to play their favorite game as soon as you get home if they behave all throughout dinner. Or maybe buy their favorite dessert afterward.

Be sure to set their expectations and offer the reward ahead instead of doing it in the middle of a tantrum.

Managing your child’s behaviors, let alone dealing with temper tantrums can be difficult. Use these tips to help you cope with your child’s fits.

For more helpful tips on parenting or if you’re looking for a good childcare center and preschool for your little one, please visit Children Central.

The staff are extremely friendly and the management are very professional. They know their business inside and out. My oldest looks forward to spending his days with his teachers and friends. The things he has learned have exceeded my expectations. I will feel confident sending him to kindergarten after spending his pre-elementary school years at Children Central.

I would recommend Children Central to any family with children! My daughter attends Children Central for 2 years now & we have had a great experience! I had attended a few open houses at Children Central but I was not sure if this was the best place for my daughter. Then, I met & spoke with Kevin who was friendly and informative and he gave me a tour of the school. I felt confident that this wo… END_OF_DOCUMENT_TOKEN_TO_BE_REPLACED

Due to the excellence of Children Central, my feelings about daycare are now 180 degrees different! I was apprehensive and sad the first day of daycare, but now, I would send my son there in any event. He has received excellent care in all regards including education, health, nutrition, and physical activity. I’ve liked all the teachers and the owners are great. They are warm, personal, and good… END_OF_DOCUMENT_TOKEN_TO_BE_REPLACED

If I could give 1000 stars I would!
If I could give 1000 stars I would! My daughter is happy when she comes home, she eats meals made by a CHEF… yes a chef you read that right. My friend daryann referred me & Best decision I made getting her into children central! I can be at work & not stress or worry about a thing! Kevin & his wife are the absolute best… so is our favorite miss daryann of cou… END_OF_DOCUMENT_TOKEN_TO_BE_REPLACED

I want to thank Children Central for making my son love his first …school experience! Starting out in the Twaddler room this summer and loving Ms Yunmi & Ms Melissa (who he truly missed) to starting Preschool and loving his new teachers too! At times he has even thrown a fit because he didn’t want to leave because he was having so much fun! (after being there from 6:45am–4pm.) He even comes ho… END_OF_DOCUMENT_TOKEN_TO_BE_REPLACED

As an educator, I know how important it is for young children to have well rounded experiences in their early years in order for them to develop to their highest potential. I researched many options in the area and was thrilled and relieved to find Children Central. After visiting several child care centers, I knew Children Central was the best fit. They offered much more than the high priced chai… END_OF_DOCUMENT_TOKEN_TO_BE_REPLACED

My wife and I are so pleased with the care our son receives at Children Central. The teachers care about all of the children and we love the curriculum for the children. I highly recommend this school because Mr. Kevin and his team are outstanding; and they continue to always strive to ensure they provide the best for all of the kids.